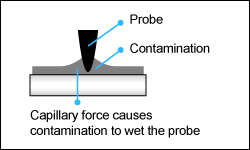 One of the great advantages in working with Atomic Force Microscopes (AFMs) is their ability to image samples in ambient air, bypassing any need for a vacuum chamber. It's essential however for AFM users to recognize and plan around the fact that in ambient air, surfaces have a contamination layer comprised of hydrocarbons and water vapor. Depending on the local environment, the thickness of the contamination layer can vary between a nanometer and tens of nanometers.

Evidence for the contamination layer can be easily observed with a force distance (F/D) curve that measures the interactive forces between an AFM probe and a sample surface. In an AFM, the F/D curve is measured by monitoring the deflection of a cantilever with a probe at its end, as the probe is pushed into the surface. As the probe moves closer to the sample surface, it is pulled in between the probe and the contamination layer by capillary forces. This is called the attractive force because the probe is pulled in toward the surface.

Understanding the contamination layer is important when imaging with AFMs for the following reasons: