Research and Publishing with AFMWorkshop

Research and Publishing with AFMWorkshop 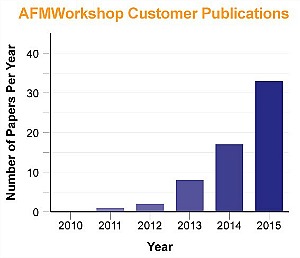 Nanotechnology research is proving to be a major application for the TT-AFM, introduced just 5 years ago. 2015 marked the biggest year to date for publications citing the AFMWorkshop atomic force microscope, and it looks like the exponential growth will continue in 2016.
The first few weeks of January, 2016 saw publications citing the TT-AFM in a wide variety of applications, including food preservation, nanotechnology of thin films for biosensor development, and nanofiber characterization for desalination membranes.

In "Fish gelatin combined with chitosan coating inhibits myofibril degradation of golden pomfret (Trachinotus blochii) fillet during cold storage," (1) researchers Feng, Bansal, & Yang extracted myofibril, the major component of fillet muscle, from fish samples and analysed samples with the TT-AFM. Imaging and quantitative analysis demonstrated how myofibril degraded during cold storage. The researchers used AFM data to suggest the mechanisms for the protective effects of chitosan coatings, a natural polysaccharide obtained from the de-acetylation of chitin in shrimp and other crustacean shells.

The group immobilized PcL342-354C, a peptide derived from the immunogenic toxin, as layer-by-layer (LbL) films onto ITO. The TT-AFM was used to examine the morphology and to quantify the surface roughness of the films produced.  The AFM results showed that the adsorbed peptide formed self-assembled nanofibers with diameters ranging from 100 to 200 nm on the polymeric film and very homogeneously distributed. The LbL films were smoother than the substrate, however, there was no difference between the surface
roughness of the films with multiple layers.

Whether an atomic force microscope (AFM) cost $30,000 or $300,000, the validity and quality of its research results and images depends less on the equipment's bells and whistles than it does on the skills and procedure of the operator and environment. For more on the essentials of AFM procedure, you may want to review articles throughout the AFMWorkshop website, including for example Four Criteria for Measuring Great AFM images, or watch one of several brief but informative AFMWorkshop training videos that include successful sample preparation, recognizing artifacts in AFM images, proper probe selection, and more. 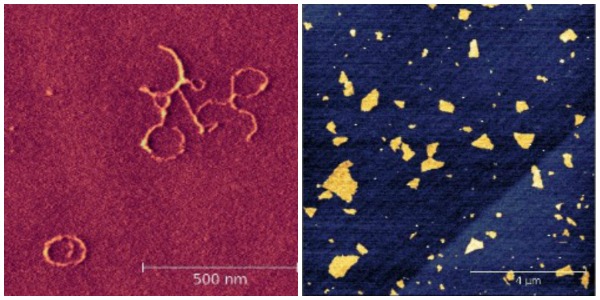