From the January, 2018 Newsletter 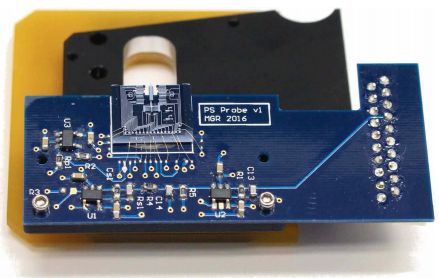 At AFMWorkshop, meeting your application needs is our number one priority. Our microscopes provide the ultimate level of flexibility and customization, allowing us to make your application ideas a reality. We will work with you on developing and implementing unique alterations to our microscopes as well as their components to ensure all your needs are met.

Our customer focus this month illustrates the level of customization and modularity the TT AFM provides. Its open architecture design has allowed researchers at the Laboratory for Dynamics and Control of Nanosystems (LDCN) at the University of Texas at Dallas to create experimental AFM scanners using microelectromechanical systems (MEMS) technology.

MEMS have already been widely implemented in technologies such as smartphones for use as multi-axle inertial sensors, i.e. gyroscopes and accelerometers. This is largely due to the fact that MEMS technology is cheaper and provides sensing capabilities in a much smaller package that can be easily manufactured on a larger scale.

Researchers Reza Moheimani, Mohammad Maroufi, and Anthony Fowler created an AFM-on-a-chip using MEMS technology by miniaturizing all of the normally bulky components of an AFM down to the size of a 1 cm2 silicon-on-insulator device to use as the AFM scanning stage (Fig. 1). 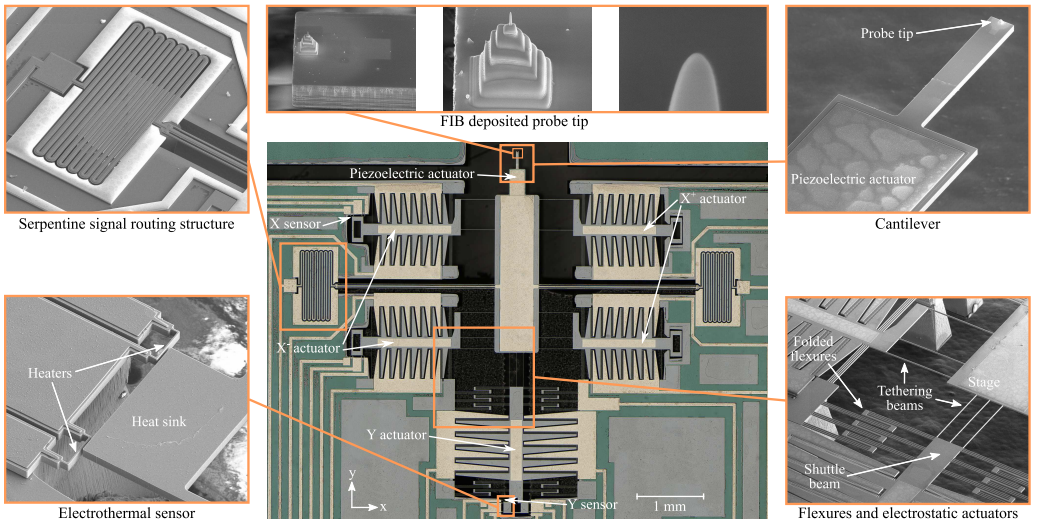 Fig. 1. The fabricated MEMS probe scanner with close-up scanning electron microscopy (SEM) images highlighting the major components of the device. Close up views of a serpentine structure for signal routing and an electrothermal sensor are shown in top-left and bottom-left, respectively. The close-up view in the top-right shows the cantilever and piezoelectric actuators. The bottom-right image shows the tethering and shuttle beams for the x and y axes, folded flexures along the y axis, and electrostatic actuators. The top close-up images show the focused ion beam (FIB) deposited tip on the cantilever for AFM imaging.

The central stage is positioned along the xy axes using electrostatic actuators, while electrothermal displacement sensors are used to facilitate a closed-loop position control of the stage. This MEMS-based nanopositioner is much smaller than traditional piezoelectric tube scanners often used for scanning microscopes and also offers a higher operational bandwidth.

A silicon microcantilever was fabricated at one end of the stage for tapping-mode AFM and is actuated in the z axis using a piezoelectric transducer made from a layer of aluminum nitride. This same piezoelectric transducer was used to simultaneously measure the deflection of the cantilever, which upon the addition of a probe tip, allowed for successful AFM scans of features on a calibration sample grating (Fig. 16). 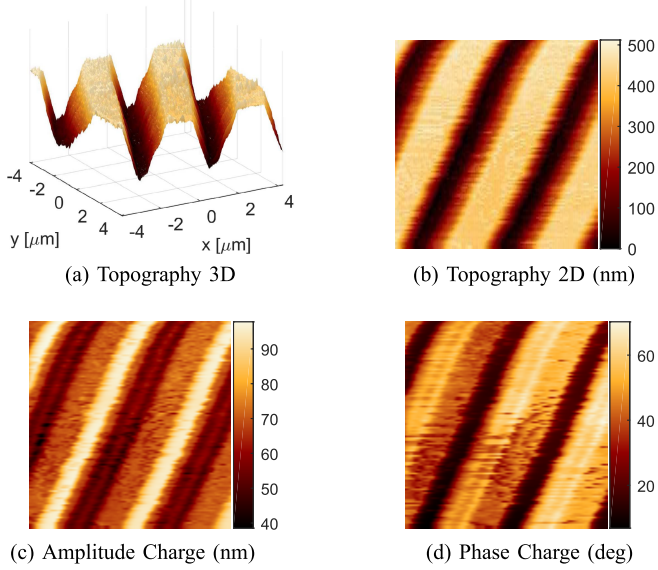 For testing, an AFMWorkshop TT AFM was employed by the researchers to demonstrate the on-chip tapping-mode atomic force microscopy. The TT AFM provided sample approach functionality via its internal z axis stepping motor as well as a convenient base to mount external circuitry used in the experiment (Fig. 13). 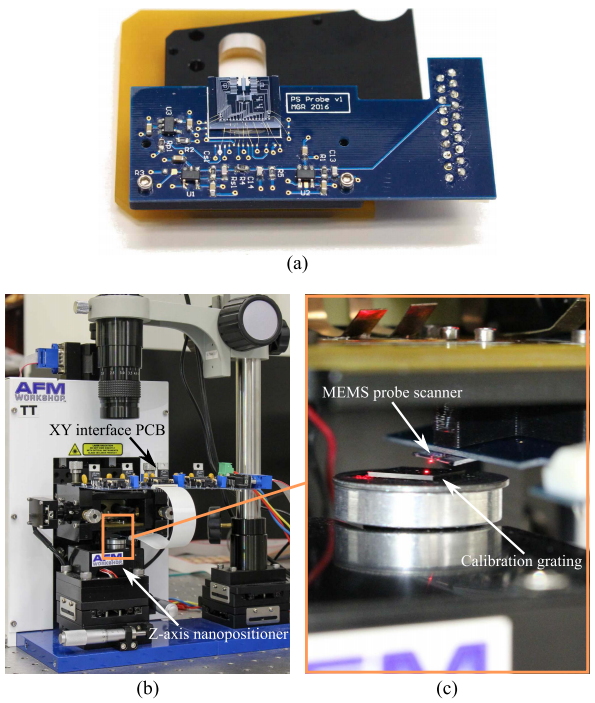 Currently, Professor Moheimani and Dr. Maroufi are working on a revised design of the AFM-on-chip, which will incorporate probe tip fabrication into the device fabrication as a whole. In the design illustrated above, the probe tip was added following the fabrication of the chip by means of focused ion beam deposition. In addition, various microcantilever sizes as well as deflection sensing schemes will be investigated in future designs.

The capability and potential of AFMWorkshop microscopes is fully illustrated by the successful work of our customers, of which include instrument innovators like the researchers at UT Dallas as well as users in other aspects of nanotechnology research. The open architecture design allows users to customize the AFM for any specific applications, opening the door to even more accessible access to AFM technology.